In the fast-paced world of today, many adults complain of stress. We often hear complaints about “burn-out”. With the increasing demands of society, even adolescents are sanctioned with endless responsibilities in their academic life, while adults are often torn between pressures of work and family. Given the mounting pressure that adults in society seem to be constantly facing, it is important for individuals in the helping profession to learn to address this pressing issue.

MLAC Institute, in partnership with the Psychological Association of the Philippines (PAP) conducted a seminar last June 23, 2012 in order to address this concern. The seminar was entitled “Play and Expressive Arts Therapy for Adolescents and Adults” . It was held in the 3rd floor of PSSC Building, Commonwealth Avenue, Quezon City. The event was organized by Ms. Richie Parr, the head of the Developmental Psychology Division of PAP.

The goal of this seminar was to introduce play and expressive art as a tool to discover the inner resources of the adolescent or adult in order to help him/her cope with the challenges he/she must face. The seminar was conducted by the husband-wife tandem, Chris and Olive Carandang, both candidates for their doctoral degree in Psychology from the University of the Philippines-Diliman.

The event was open to interested participants, and it was attended by people of various backgrounds, all sharing the common goal of the willingness to help others.

The seminar began with a getting-to-know-you activity that also incorporated some self-discovery. Each participant was provided a kit that contained art materials they could use for the activity. This was followed by a talk on the essence of play and expressive arts as therapeutic means for others which was facilitated by Chris Carandang. Chris has been practicing expressive arts therapy with children and adolescents and  is at the same time a candidate for a doctoral degree in Clinical Psychology. 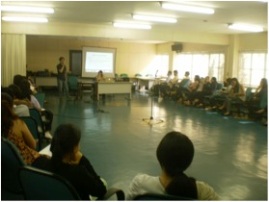 He began by describing play as a “spontaneous and active process in which thinking, feeling, and doing can flourish”. He further emphasized that play is an enriching activity that is essential to everyone since it facilitates relaxation, enjoyment, and even the development of creativity.  He also clarified that in expressive arts therapy, the process rather than the product takes precedence. This is one benefit that makes expressive arts appealing, especially because there are some emotions that people feel they are unable to sufficiently convey through words. Healing occurs as the client gets in touch with his emotions through his artwork at his own preference and pace. As a therapist, it is important to always be respectful of the client’s space, to serve as a companion rather than a dictator in the journey that your client embarks in. 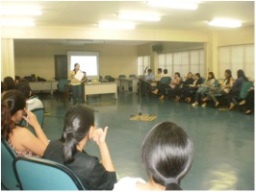 The next portion of the seminar was on the use of play and expressive arts therapy for the self. The talk was conducted by Olive Carandang, who is a practicing faculty at Miriam College with a specialization in Personality Psychology. She discussed the essence of allotting time simply for one’s self, especially for the individuals in the helping profession. She also discussed the many uses of play and expressive arts therapy for self-enrichment. Firstly, expressive arts allows for individuals to clarify their own feelings. It can also serve as a tool for self-expression, or simply a companion during the need for one’s alone time. For some, it serves as a means for distressing or coping with their daily demands. Perhaps the greatest benefit in the practice of expressive arts for the self is it becomes an avenue for self-growth. Her talk ended with an activity for the self, a visit to own’s safe place and an opportunity to express and share this safe place to the other participants. Before the participants were sent off, the speakers shared a song they composed.

The seminar served as an opportunity to develop a further appreciation for the use of play and expressive arts as a tool not only to assist others, but also to allow for self-growth.