Last April 25, 2012, the Movie and Television Review and Classification Board (MTRCB) held its First Child Summit at Mabini Building, Malacanang , Manila. The MTRCB along with its partner agencies graced the occasion with their presence. This summit was pioneered in the effort to uphold the rights of the children in the media, both as participants and audiences of the industry.

During the summit, representatives from the different government agencies were given a chance to inform the body of existing trends as well as remind the assembly of the adults’ responsibilities to the children. Among the partner agencies that participated in the summit were the Department of Education (Dep-Ed), Department of Labor and Employment (DOLE), Department of Social Welfare and Development (DSWD) , Council for Welfare of Children (CWC), and National Children’s Television (NCTV). Television networks were also given an opportunity to present their existing practices in upholding the rights of the children. 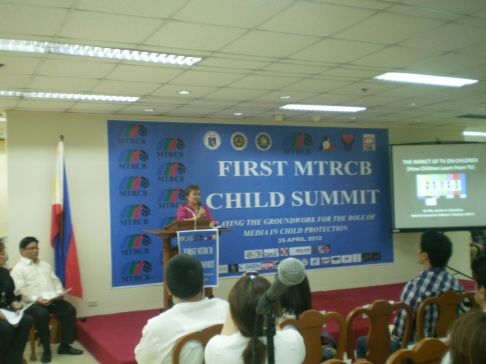 The main presentation was provided by Dr. Carandang of the MLAC Institute. She spoke of the tremendous power of television in shaping the minds of our children. She began by explaining the dynamics of a child’s mind across several developmental stages. Dr. Carandang made two important points clear in her message. First, the age of the child affects the way he/she understand what is seen on television. Second, children don’t always like what they see on TV. She explained how children absorb images from television uncritically, totally, and subliminally in preschool because critical thinking has not yet developed.

She challenged the television networks to produce shows for children that ‘delight and not depress them, that respect and not degrade them, that make them hopeful and not hopeless’ .

They deserve no less. Hence, there is a call for greater vigilance not only from the government and media industries, but among parents as well, in supervising their children in viewing television. Furthermore, there exists a need for greater child participation in determining appropriate content in movies and television shows.

A panel discussion was conducted in order for the assembly to better understand the experiences of child actors in the industry. The panel was comprised of child actors across generations.  It became a fitting avenue to appreciate the innovations created through the years in order to protect children’s rights. At the same time, it served as a means to determine measures to further enhance the protection of children’s rights.

The summit was a reminder for adults to fulfil their role as protectors of children’s rights. The content of television shows greatly affect children. Hence, there is a need to adopt more conscious efforts to regulate the material aired by the media. However, child protection does not end in the creation of laws or in the attempt to foster better means of implementation.  There is a need to involve all key players within the industry. Another determined ally is the parents. Efforts will still not totally flourish without their cooperation. There exists a need for parents to play a more active role in shaping their child’s informed judgement through constant supervision of their children, whether the children are participants or beneficiaries of the media industry.

MTRCB Members and the Child Actors